Last year was an incredibly strong one for the stock market and the U.S. economy. Stock indexes ended the year with gains that quadrupled their historic annual averages, while the U.S. unemployment rate hit a nearly 50-year low of 3.5% in October. We have to go all the way back to December 1969 to find… 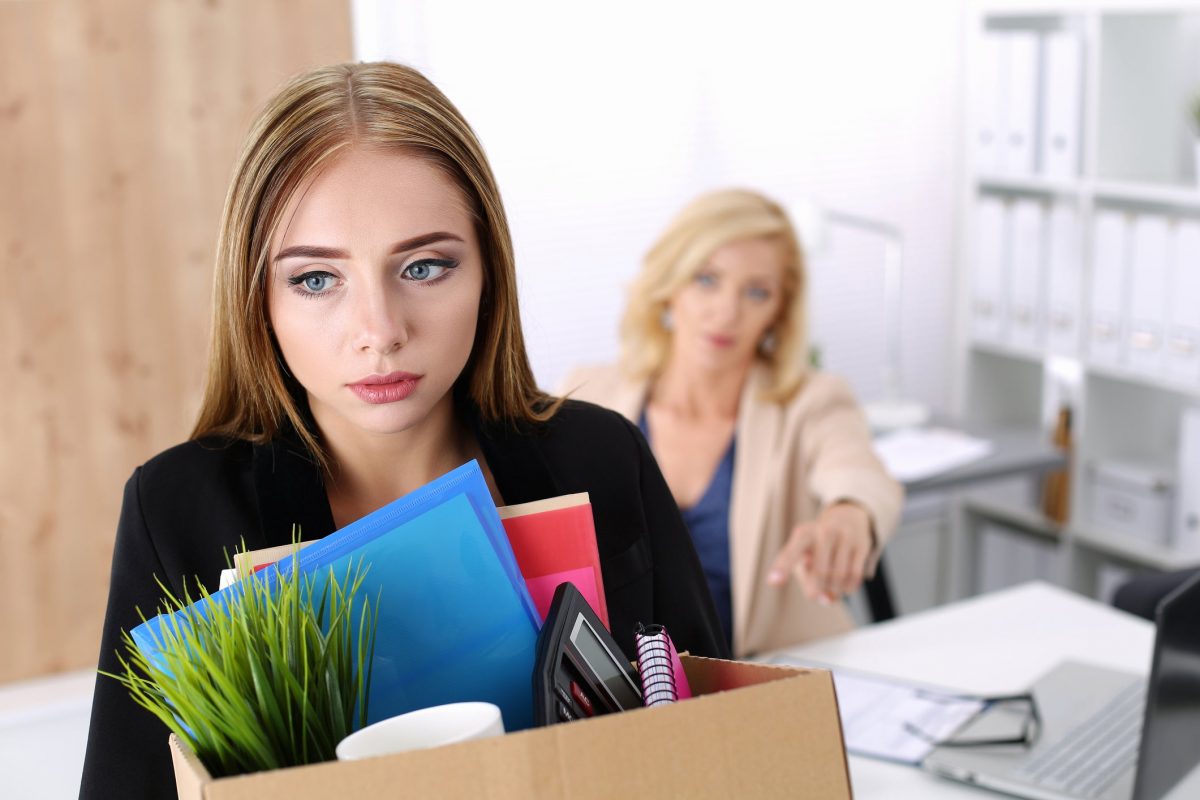 Last year was an incredibly strong one for the stock market and the U.S. economy. Stock indexes ended the year with gains that quadrupled their historic annual averages, while the U.S. unemployment rate hit a nearly 50-year low of 3.5% in October. We have to go all the way back to December 1969 to find a time where the U.S. job market looked this strong, as a whole.Yet even this impressive of a performance hasn’t been able to save workers at select companies from losing their jobs in the U.S. and around the world.As we turn the page toward a new decade, let’s look back at 25 companies that laid off workers in 2019.The only pedal put to the metal in the auto industry in 2019 was in the pink-slip department, with Detroit’s Ford Motor (NYSE:F) leading the way. In May, Ford shifted gears by announcing 7,000 job cuts, or about 10% of its salaried worldwide staff at the time. The move, designed to save $600 million annually, is part of the company’s longer-term plan to restructure its business to modernize its fleet and boost its overseas sales.Then, just five weeks after declaring its intention to shed 7,000 salaried workers, Ford wielded its ax once more by announcing the expected departure of 12,000 workers in Europe by the end of 2020. This’ll include the sale or closing of six of Ford’s 24 European plants and reduced production/work shifts at plants in Germany and Spain.With Adam Jones of Morgan Stanley on record as suggesting that Ford will need to shed 30,000 total jobs to meet its profit goals, this unfortunately may not be the last round of pink slips the company hands out.

Though Walt Disney (NYSE:DIS) has a history of bringing delight to children and families with their iconic movies and unforgettable theme parks, the House of Mouse has been cleaning house of late, especially in the company’s film and distribution operations.
The reason for the job cuts is Disney’s now-completed $71.3 billion acquisition of 21st Century Fox this past March. Disney has been busy severing overlapping operations, most of which have been found in the combined company’s film and television segments. It’s worth noting that it’s not just previous Fox employees getting the ax, but rather a combination of Disney and Fox workers. As of early August, about 250 workers had been let go.
However, according to TheWrap.com, up to 4,000 employees from the combined company are eventually expected to get walking papers in an effort to save $2 billion on an annual basis. While there’s no denying that 21st Century Fox’s assets are worth the price, Disney has become the proverbial Death Star for a growing number of workers.
Image source: Getty Images.

4. Deutsche Bank
A pretty common theme in 2019 was big-bank layoffs, and Germany’s Deutsche Bank (NYSE:DB) undoubtedly heralded that charge.
In July, Deutsche Bank unveiled an $8.3 billion restructuring plan designed to reduce costs and better align the bank to compete globally. This means reducing the company’s struggling investment banking business, closing its equity sales and trading business, and creating a bad bank for about $83 billion in troubled assets. It also meant the disposition of 18,000 jobs by 2022. That’s roughly a fifth of Deutsche Bank’s 92,000-employee workforce.
Reportedly, around half of the company’s layoffs will come from its home market of Germany, with slightly more than 4,000 jobs having already been cut through the third quarter of 2019, according to company data. About three-quarters of the layoffs in 2019 have centered on its capital release unit (i.e., all the businesses being wound down), with another 730 jobs lost at its investment banking unit.
Image source: Lowe’s.

5. Lowe’s
Do-it-yourself home improvement giant Lowe’s (NYSE:LOW) is another brand-name company that announced it would lay off “thousands of workers” in 2019, albeit the company declined to offer a specific number of job cuts. Lowe’s did, however, note that the cuts would come from eliminating maintenance and assembly worker positions, with these existing positions being outsourced to a third party. The company described the reasoning for the layoffs as an effort to move associates onto the floor to help customers, rather than having them assembling products like patio furniture behind the scenes.
For anyone closely following Lowe’s, these cuts probably come as no surprise. Since becoming CEO of the home improvement company in July 2018, Marvin Ellison has unleashed an ambitious plan to close the gap between it and Home Depot. Among the many changes, Ellison has emphasized tightening the company’s belt and improving operating margins. Lowe’s closed around 20 stores in the U.S. through July, as well as shuttered its 99 Orchard Supply Hardware stores in the United States. To continue closing the gap with its key rival, further cuts may be on tap.
Image source: Getty Images.

6. Amgen
Healthcare companies may be relatively recession-resistant given that people don’t get to choose when they get sick or what ailment they develop, but even that doesn’t save them from dishing out the occasional pink slip from time to time.
In November, biotech giant Amgen (NASDAQ:AMGN) declared two rounds of job cuts. First, the company announced the elimination of 149 jobs in Massachusetts by the end of the year that are tied to its neuroscience research and development operations. These cuts follow an unsuccessful clinical trial involving CNP520, an experimental BACE inhibitor developed in partnership with Novartis that was being tested as a treatment for Alzheimer’s disease.
The company also announced 172 additional job cuts that’ll affect employees at its California headquarters and in the field. With brand-name therapies Neupogen and Neulasta already facing biosimilar competition, and it only being a matter of time until anemia drug Enbrel is dealing with the same, Amgen is looking to trim costs to counter its modestly shrinking sales.
Image source: Getty Images.

7. Oracle
Similar to Amgen, enterprise cloud and infrastructure technologies provider Oracle (NYSE:ORCL) laid off workers in two separate instances in 2019.
In May, Oracle wound up showing 352 of its California employees the door. These job cuts, which were announced in March, are part of a constant rebalancing by the company to remove jobs in lower-margin legacy operations and focus on higher-margin cloud services. Oracle referred to its May cuts as “permanent.”
Then, in August, the company issued a second round of cuts totaling around 300 workers in the company’s flash storage division. Similar to the May cuts, this is all about repositioning its workforce to drive higher margins, rather than the trying to cling to legacy operations. Not to mention, a number of Oracle’s flash storage peers have dealt with a recent drop-off in sales, so these cuts may well be warranted. Just keep in mind that this is a relatively small percentage of job losses for a company that employs around 140,000 people worldwide.
Image source: Getty Images.

8. Bed Bath & Beyond
As consumers move their purchases from brick-and-mortar stores to the internet, traditional retailers have felt the pinch. That’s why home furnishing retailer Bed Bath & Beyond (NASDAQ:BBBY) has used its proverbial scissors to make cuts in 2019.
In March, the company shed around 150 of its 65,000 employees, with two-thirds of these cuts coming from its wholly owned decor chain, Christmas Tree Shops. These cuts were made just a few days after a number of activist investment funds took stakes in Bed Bath & Beyond and demanded a complete shakeup of the company’s board of directors.
The bigger round of pink slips was announced in July. In an effort to save nearly $19 million for the remainder of fiscal 2019, Bed Bath & Beyond reduced its corporate headcount by 7%. Among the layoffs was Eugene Castagna, who’d been the company’s chief operating officer. The company decided as part of its corporate review to eliminate the COO position altogether. As consumers continue to shift their purchasing online, it wouldn’t be surprising if the job cuts continued at Bed Bath & Beyond.
Image source: Tesla.

9. Tesla Motors
Tesla (NASDAQ:TSLA) and its lineup of all-electric vehicles might be the hottest thing to hit the road in decades, but that doesn’t make its employees immune from job cuts.
In January, CEO Elon Musk made the tough decision to let 7% of the company’s full-time workforce go — roughly 3,000 people — in an effort to conserve cash. Despite continuing to field strong orders for the flagship Model S, Musk believes it imperative that Tesla transition away from its reliance on luxury vehicles and toward more affordable, mass-produced EVs like the Model 3. But to do so, capital needs to be conserved, which is why 3,000 workers lost their jobs to begin the year.
And this wouldn’t be Tesla’s only round of cuts, either. Although the company refused to cite a specific number, dozens of sales team members respon
Read More From Publisher