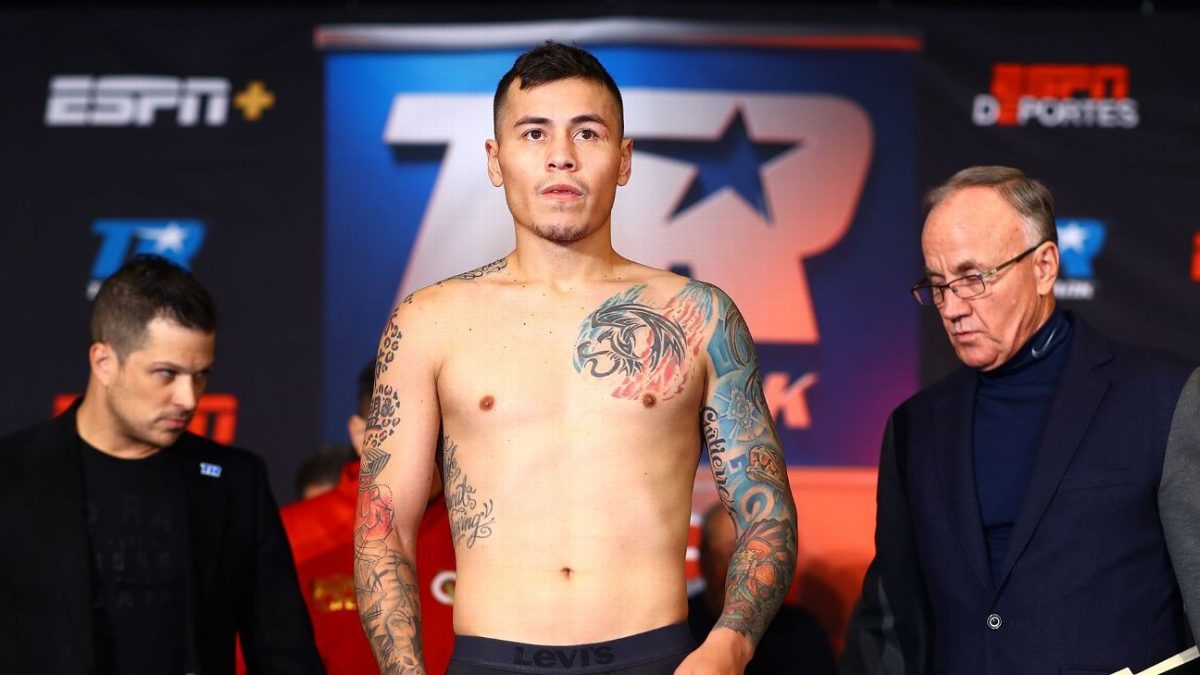 Dec 2, 2019Dan RafaelESPN Senior Writer Close2013 BWAA Nat Fleischer Award winner for excellence in boxing journalism
ESPN.com boxing writer since 2005
Five years at USA TodayIn the end, former featherweight world titlist Oscar Valdez made a successful debut in the junior lightweight division by stopping game Adam Lopez in the seventh round of a highly competitive fight on Saturday night in Las Vegas. But what happened the previous day cannot be ignored.That is when Andres Gutierrez arrived at the weigh-in and had the audacity to step on the scale at 141 pounds, a massive 11 pounds over the contract weight of 130 pounds for what was to be a title elimination fight with Valdez, who weighed in at 129.8 pounds.Fighters always know what they weigh going into a fight, and Gutierrez was obviously aware he was nowhere close. With that much of a difference, there would be no chance for him to take a couple of hours to lose the extra weight, which is the norm in these situations. He was so far over weight that Nevada athletic commission rules would not allow for the fight to go ahead even if Valdez (27-0, 21 KOs) was willing.Keep in mind that Valdez’s career might have been permanently altered by fighting an opponent who missed weight. Scott Quigg was to have challenged Valdez for his featherweight title in March 2018 but was 128.5 at the weigh-in for a 126-pound fight. Valdez decided to go through with the fight even though Quigg refused to agree to a weight check the morning of the bout.By fight night Quigg was way bigger than Valdez, who suffered a badly broken jaw in a grueling decision win. Valdez was out for 11 months because of the injury, and the weight disparity may very well have contributed to the outcome.Gutierrez’s miss disrespected Valdez, fans, promoters, the commission and boxing in general. Top Rank chairman Bob Arum had every right to be as angry as he was.”We’re throwing him out of the hotel,” he said after Gutierrez weighed in. “I’ve seen a guy 2, 3 pounds over weight. That’s still unprofessional. To come in 11 pounds over weight is a f—ing disgrace. A disgrace. I’ve never seen anything like it. He showed up at the last minute. It’s disgraceful. Valdez trained his ass off, and then for a guy to come in 11 pounds overweight is a disgrace.”What promoter would ever book him after this debacle? Arum says he won’t.”I won’t ever use him or any of the people who made the fight for him,” Arum said.Had Gutierrez or his team at least notified Top Rank that there was a problem, company officials would have been upset, but at least they would have had some time to look at options for securing a new opponent instead of basically getting lucky that Lopez (13-2, 6 KOs), who was on the undercard in a featherweight preliminary, was willing to step up and that Valdez, who earned a shot at titlist Miguel Berchelt with the win, was also willing to face him on about 30 hours’ notice.What makes the Gutierrez situation even more galling is that at the WBC-mandated prefight weight checks he was on target for 130 pounds. The WBC reported that he was 142.7 pounds at the 30-day weight check, 136.8 at the 14-day check and 133 at a seven-day check.Then he was 141 when it really counted.It was the second week in a row that notable fights were impacted by fighters missing weight. On the previous week’s Deontay Wilder-Luis Ortiz II heavyweight title card, former bantamweight titlist Luis Nery missed weight (again), coming in a pound over the 118-pound limit. Former titlist Emmanuel Rodriguez refused to fight him when Nery declined to attempt to lose the extra pound, and the fight — a good one on paper — was canceled.The WBC punished Nery by stripping him of his status as its mandatory world title challenger, and he and Rodrigue
Read More From Publisher