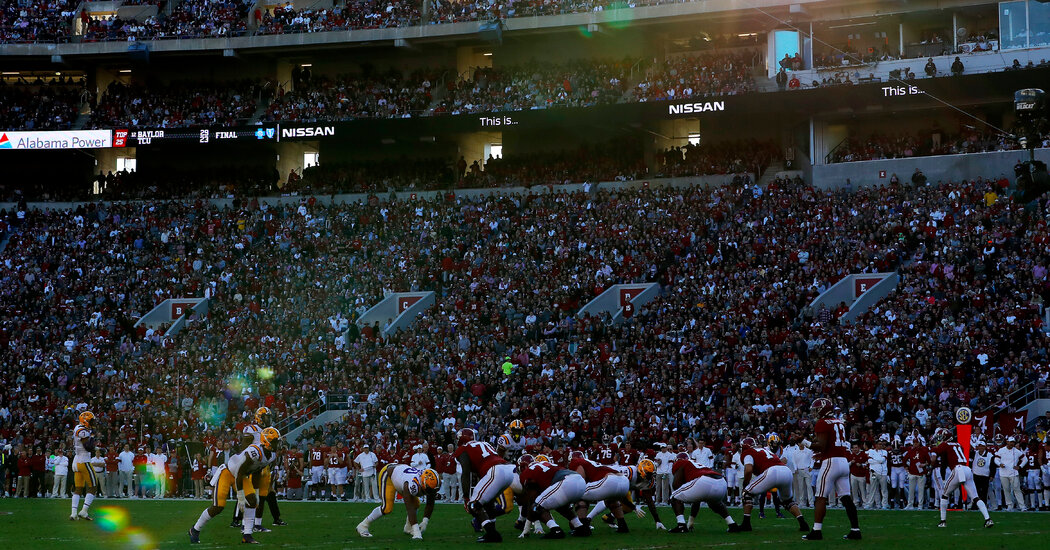 On College FootballMany players thought to be the best in the sport won’t play in the fall because of the pandemic. And some teams expecting to play soon can’t practice because of emerging cases of the coronavirus.The University of Alabama reported more than 500 coronavirus cases campus-wide since Aug. 19.Credit…Kevin C. Cox/Getty ImagesAug. 25, 2020, 6:24 p.m. ETAs with all things related to college football at the moment, The Associated Press preseason All-America team, which was revealed on Tuesday, might look good only on paper. It included Oregon tackle Penei Sewell, Penn State linebacker Micah Parsons and Pittsburgh defensive tackle Jaylen Twyman — along with eight others who won’t play football this fall, because either they or their university presidents did not believe it was safe.The announcement became another in the persistent drip of reminders about how tenuous this truncated, diminished college football season remains less than two weeks before it is scheduled to kick off into the teeth of a pandemic.Soon after the All-America list was released, Texas Tech announced that it had 21 active coronavirus cases in its football program, and Oklahoma Coach Lincoln Riley told reporters that an entire position group — save one player — had to stop practicing because of positive tests. And the preseason list came out one day after North Carolina State, which has moved classes online, said it would pause all sports activities after three clusters of cases broke out on campus, including one in athletics.A telling moment about the reckoning that college football is facing came Monday in Tuscaloosa, Ala., where University of Alabama officials reported that they had recorded more than 500 cases since Aug. 19.Clearly, not even public service announcements by Coach Nick Saban about wearing masks in public — a protocol he has followed in practice, quipping, “I look like Jesse James robbing a bank” — have worked. (Alabama’s nearby rival, Auburn, checked in with just over 200 cases in its first week of classes.)The outbreaks in Tuscaloosa prompted Mayor Walt Maddox to shut down bars for 14 days, a two-week deprivation of Yellowhammer cocktails that is either the price to be paid for past partying or a sobering reminder that college football really, truly is in jeopardy if college kids don?
Read More From Publisher