WESTFIELD, Ind. — Twenty minutes into our conversation, it was time to ask a question that had become the obvious one, given where the discussion with Andrew Luck was headed. Do you think 10 years from now you’ll view your shoulder surgery as a blessing in disguise? “I’ll say it right now—I think it was… 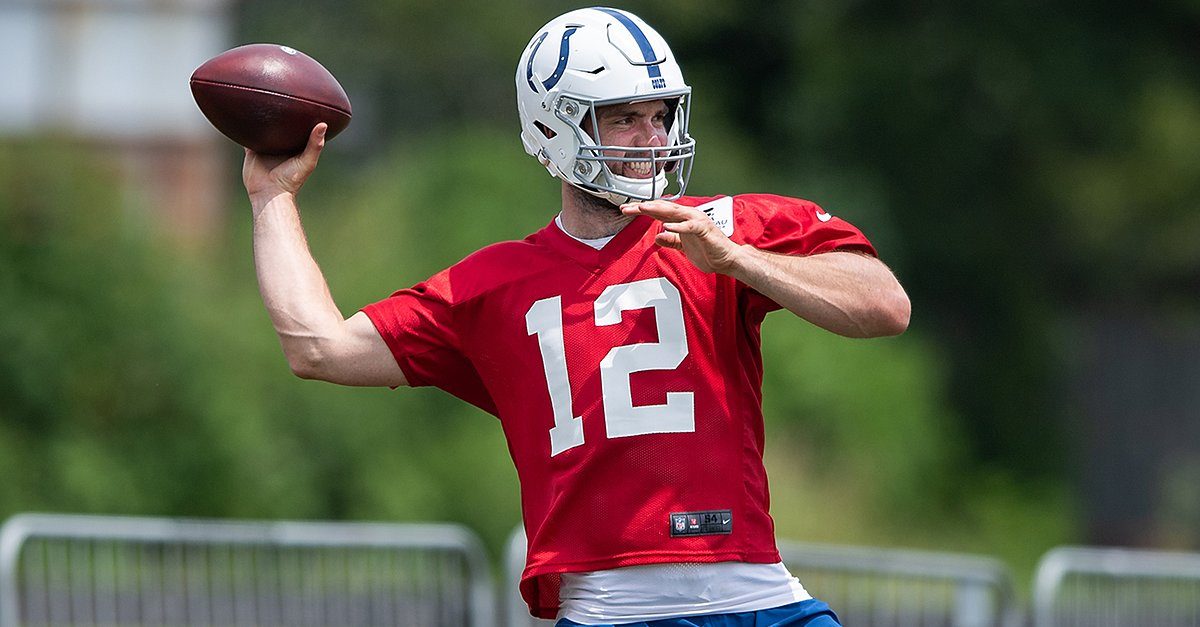 WESTFIELD, Ind. — Twenty minutes into our conversation, it was time to ask a question that had become the obvious one, given where the discussion with Andrew Luck was headed.
Do you think 10 years from now you’ll view your shoulder surgery as a blessing in disguise?
“I’ll say it right now—I think it was a blessing in disguise,” Luck said. “Absolutely. It forced me to reevaluate many, many things in my life. And the result has been … yeah, really positive. And I shudder to think of not having that. I don’t think I’m married if that had not happened. I think I eff that up. I truly do. I truly do.”
Luck paused for a second and collected his thoughts.

“I mean, now, it’s all good,” he continued. “But yeah.”
Too often, maybe as a result of our own navel-gazing, we position events in an athlete’s career—a win, a loss, a setback or, yes, an injury—as life-changing. In Luck’s case, what he went through in getting from his initial shoulder injury in 2015 to this point actually was.
The son of an NFL quarterback and an athletic prodigy of LeBron-ian proportions coming up, Luck’s path to a career in sports was always much different from those of most athletes. From the start, there were few who could quite relate to him, and the pressure he was putting on himself to get here.
Which meant his whole life became go, go, go. Then, it stopped.

And that it stopped facilitated the change. He’s different now. People around him have noticed. Most importantly his wife, Nicole, has seen it as the two expect their first child.
“It’s more, ‘Hey, you seem happier.’ Or ‘You seem less burdened.’ One of the big things, and I still struggle with, I realize you don’t just get it and you’ve got it forever,” Luck said, snapping his fingers. “I eff up constantly. There’s always something. That’s the beauty of life, I guess. But being present—be where your feet are, live in the moment, be present—it’s really something I tried last year during the season.”
Luck thinks he’ll be a better player for it. The Colts do too. We’ll explain why.
Ahead of this week’s Game Plan, I’m seven camps deep, and answering your questions on:

• A Trent Williams trade.
• The coaches who run the crispest practices.
• Sleeper rookie running backs.
• The Patriots’ post-Brady plans.
• Lamar Jackson’s future.
• MORE!
But we’re starting in Indianapolis, and the player the Colts think Luck is about to be.
On this late July afternoon, Luck was still nursing an ankle injury. Earlier in the day he’d been limited in practice. But that didn’t much prevent him and coach Frank Reich from pursuing the goal they’ve set for themselves and the offense. Really, Luck mostly needs mental reps to get there, and he got those.

“There’s seven to 10 plays a game that he just has to take over, as far as just getting us into the right play, seeing it, getting everyone in the right position, whether it’s a protection call or a run check or a pass check or he sees an all-out blitz and we’re checking to something there,” Reich said. “He’s got to have a complete mastery. Part of the philosophy of our offense is built on that—we want the quarterback to have that, and Andrew can do all that.”
Reich says that Luck was doing some of this toward the end of last year, as Indy caught fire, and he and his quarterback just want more of it, to the point where he can make a decision and go. “Aggressive but conservative,” Reich says, “they seem like they don’t go together, but with someone like Andrew, they do.”

And finding that balance means everyone pushing towards that goal. The players. And the staff.

“They coach hard,” Luck said. “But it’s always coaching, it’s teaching, and I respect that. It’s, ‘Hey, you guys are on the field. At the end of the day, we’re standing on the sideline and we’re trying to give you guys the tools to go win, that’s what it’s all about. You guys are the team. The locker room is the team.’ And in a little way, that’s scary, that’s responsibility, that’s ownership, that’s us. But I think for us as a team to take those next steps, that’s what it has to be.”
Six weeks from his 30th birthday, Luck now feels more equipped to do that—to get himself there personally, and to lead the Colts there collectively—than he ever was before he blew out his shoulder. And that’s because he’s found a place mentally that has him more prepared for whatever’s coming next.

This part of the story goes back to the fall of 2017, when football was taken from Luck for the first time since he was a kid. Last summer when we talked he referred to the “dark place” he’d been in. A year later he told me he’s not wild about that term, but conceded there really isn’t a better one to describe where he was.
On the surface, anyone could guess that the injury put him there. What he started to realize next would save him—that his tendency to try to go it alone, maybe because he’d always faced such high expectations, both internally and externally, was keeping him there. So he tried leaning on the people around him. He leaned on his wife. His family. And eventually, guys like Reich and Colts GM Chris Ballard. Only then could he get to the root of the issue.

“I’d put way too much of my self-worth directly into how I was performing on the football field,” Luck said. “And then I wasn’t on the football field and I felt quite empty. It was very unhealthy, first for me, second for the relationship with my now-wife, and my other relationships. The result has been the best thing that ever could’ve happened. It forced me to look in the mirror and do a character assessment, and address the things I didn’t like and then the things I did like, and then get on the same page with the people I love and respect.”
So he stopped focusing on end goals and started focusing on getting better, and not just in football, but in every aspect of his life. He worked on—here’s that term again—being present.

Last year that meant when he went home from work, he went home from work. He’d do what he needed to at the facility and leave it there. Just the same, he did his best—and this has been hard—to leave the highs and lows of a football season at the office too. He wanted to do it for the people around him. But he soon realized how much he was helping himself.
“Get your work done at the building, and when you go home, go home, be present,” Luck said. “And if I wasn’t, I addressed it with my wife—‘I need to call on this right now, because this is on my mind, and it can’t wait ’til morning.’ And in an odd way, that helped football. It helped me work harder, work smarter, be more present at football, be in it.”

It’s not as if the football part was a problem. Luck wasn’t bad last year, at all. He notched career highs in passer rating and completion percentage during a season in which he threw more passes than he ever had previously. His
Read More From Publisher